Anatomy of the Eye 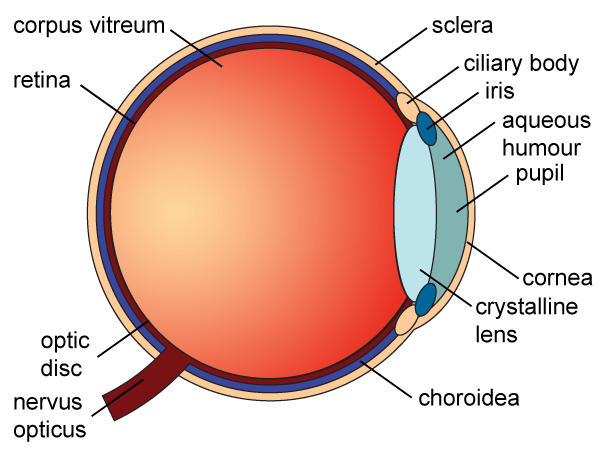 The human eye is the organ of sight. The eyeball is an amazing structure. It is the organ that gives us the sense of light, allowing us to observe and learn about our surroundings. The eyeball is only one inch in diameter, about the size of a Ping-Pong ball, and is a direct extension of the brain.

The function of the eye is to take an object of interest, gather and focus light from the object and transmit a clear image to the light-sensitive tissues which line the back of the eye where the image is received and initially processed.
The image is then transmitted by electrical impulses along the optic nerve, a nerve that connects the back of the eye to the brain. The optic nerves from both eyes join together in the brain in a way so that images from both eyes are merged together to form a binocular vision.

The visual cortex in the back part of the brain receives these visual messages and from there connections reach out to many other parts of the brain.

Cornea: The cornea is the transparent, dome-shaped window covering the front of the eye. It is a powerful refracting surface, providing 2/3 of the eye’s focusing power. It gives us a clear window to look through. The cornea is extremely sensitive. There are more nerve endings in the cornea than anywhere else in the body. The cornea is comprised of five layers. The outer most layer is called the epithelium, then the Bowman’s Membrane, Stroma, Descement’s Membrane, and lastly the endothelium.

Iris: The iris acts as a diaphragm or circular shutter responsible for controlling the diameter and the size of the pupil and the amount of light entering the eye. The color of the iris gives the eye its beautiful color.

Lens: The crystalline lens is the clear part of the eye behind the iris that helps to focus light on the retina. The lens helps to focus on both far and near objects so that they are perceived clearly and sharply. The purpose of the lens is to present as sharp an image on the retina as possible.

Pupil: The pupil is just a hole in the iris. The reason why it’s black is because the layer of pigment inside the eye absorbs major parts of the light, resulting in a darker shade.

Sclera: The sclera is the white of the eye. It is the tough outer coat of the eye that covers the eyeball except for the cornea.

Choroid: (Choroidea) the choroid is a thin layer of blood vessels and connective tissue between the sclera (white of the eye) and retina. The choroid supplies blood to the retina and conducts arteries and nerves to other structures in the eye.

Aqueous Humor: The aqueous humor is the watery fluid between the cornea and the crystalline lens. It maintains the pressure needed to inflate the eye and provides nutrition for the central cornea and lens, as they do not have their own blood supply.

Retina: The retina is the light-sensitive layer of tissue at the back of the inner eye. Images come through the eye’s lens and are focused on the retina. The retina then converts these images to electric signals and sends them via the optic nerve to the brain.

Optic Disc: The circular area in the back of the inside of the eye where the optic nerve connects to the retina. Also called the optic nerve head. The optic disc is also the entry point for the major blood vessels that supply the retina.

Vitreous Humor: (corpus vitreum) the vitreous humor is a clear gel-like substance filling the eyeball, behind the lens.