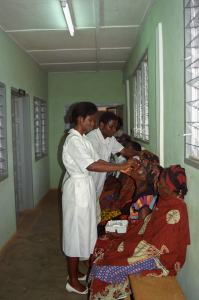 The disease spreads from person to person by the bite of a blackfly. When a blackfly bites a person who has river blindness, microscopic worms in the infected person’s skin infect the blackfly. These develop over two weeks to a stage where they are infectious to humans. When an infectious blackfly goes on to bite another person, it will typically inject one or two larvae along with its bite, thus transmitting the disease to the person.

According to the World Health Organization (WHO), an estimated 17.7 million around the world are affected by river blindness. Of this number, about 270,000 are blind and another 500,000 have visual impairment. About 99% of infected persons live in Africa, with the remainder in Yemen, Mexico, Guatemala, Ecuador, Colombia, Venezuela and Brazil. Visitors to villages in have reported that all of the adult members of a village can be blind from river blindness and are led around by children who have not yet become blind.

Blackflies bite during the day. The best prevention is to avoid infective bites of the blackfly by using insecticides such as DEET, and wearing long sleeved shirts and pants. Neither a vaccine nor preventive drugs are available.

Those with symptoms will usually experience one or more of the following: intense itching skin rash and discoloration, eye lesions, and/or subcutaneous bumps (nodules) under the skin. The skin becomes depigmented after the lesions heal.

River blindness is commonly treated with an oral medicine, which is administered with a dose every six to 12 months.

In a number of areas of the world, efforts to eradicate this disease are ongoing by treating entire groups of people twice a year.