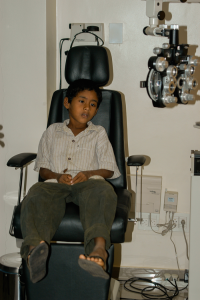 Trachoma is a bacterial infection that affects your eyes. The bacterium that causes trachoma spreads through direct contact with the eyes, eyelids, and nose or throat secretions of infected people.

Trachoma is extremely contagious and almost always affects both eyes.

Untreated trachoma can lead to blindness.

Trachoma is the leading preventable cause of blindness worldwide. The World Health Organization (WHO) estimates that 8 million people worldwide have been visually impaired by trachoma. WHO estimates more than 84 million people need treatment for trachoma, primarily in poor areas of developing countries. In some of the poorest countries in Africa, prevalence among children can reach 40 percent.

Trachoma is a disease of poverty, associated with overcrowded housing and inadequate public health infrastructure, water supplies and sanitation.

Most of the cases of active infection occur in young children. Women suffer much more frequently and severely from trachoma than men. This is because women are usually the caregivers of young children.
If trachoma is treated early, it often may prevent further trachoma complications.

Treatment consists of antibiotic in the active or childhood stages of the disease, surgery to scarred eyelids, antibiotic drops and ointments to treat secondary infections and in rare cases, corneal grafting.

The key to prevention is to help communities emerge from poverty.