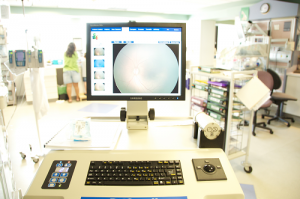 Retinopathy Of Prematurity or ROP–Occurs when a baby is born too early, for example at 24 weeks instead of its usual 40 weeks, the retina does not have time to develop and they are at risk for ROP. ROP is a series of destructive retinal changes that sometimes develops after prolonged life-sustaining oxygen therapy is given to premature infants. In the active stage, findings include dilated, tortuous peripheral blood vessels; retinal hemorrhages; and abnormal newly formed blood vessels.

This disorder—which usually develops in both eyes—is one of the most common causes of visual loss in childhood and can lead to lifelong vision impairment and blindness.

Infants with ROP are considered to be at higher risk for developing certain eye problems later in life, such as retinal detachment, myopia (nearsightedness), strabismus (crossed eyes), amblyopia (lazy eye), and glaucoma.

The most effective proven treatments for ROP are laser therapy or cryotherapy. Laser therapy “burns away” the periphery of the retina, which has no normal blood vessels. With cryotherapy, physicians use an instrument that generates freezing temperatures to briefly touch spots on the surface of the eye that overlie the periphery of the retina. Both laser treatment and cryotherapy destroy the peripheral areas of the retina, slowing or reversing the abnormal growth of blood vessels. In the later stages of ROP, other treatment options may include a scleral buckle or a victrectomy.

While ROP treatment decreases the chances for vision loss, it does not always prevent it. Not all babies respond to ROP treatment, and the disease may get worse. If treatment for ROP does not work, a retinal detachment may develop. Often, only part of the retina detaches. When this happens, no further treatments may be needed, since a partial detachment may remain the same or go away without treatment. However, if the center of the retina or the entire retina detaches, central vision is threatened, and surgery may be recommended to reattach the retina.